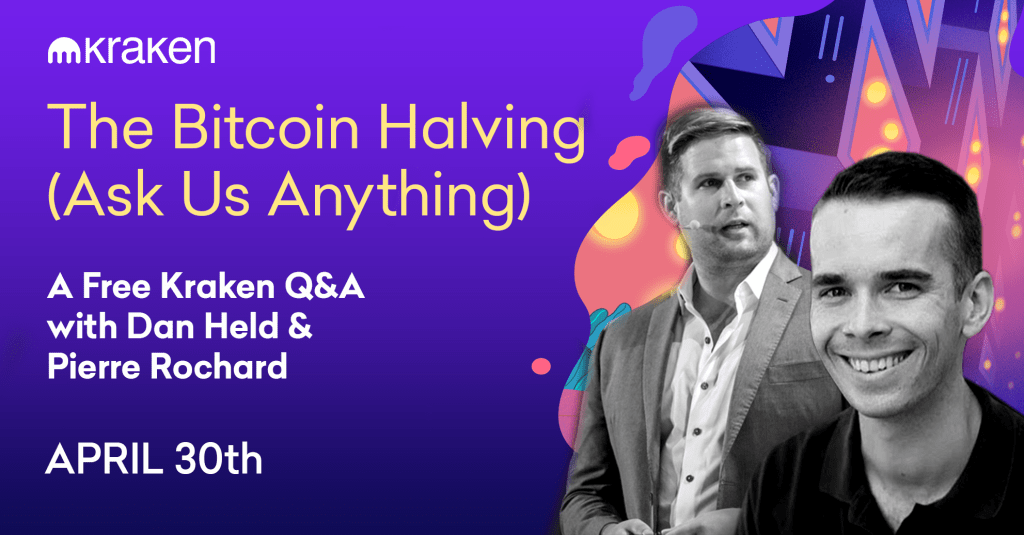 Update: This webinar has since aired. You can find the full video recording here.

In just a few short weeks, Bitcoin will complete its third halving, a scheduled change to its monetary policy that’s central to its value proposition as a scarce digital asset.

At that time, the amount of newly minted Bitcoin, introduced in each new block, will be reduced, dropping from 12.5 to 6.25 BTC. But this seemingly slight change has wider implications.

To help clients better understand the Bitcoin halving and what it means for their portfolios, we’re making our top internal experts – Director of Business Development, Dan Held, and Bitcoin Strategist, Pierre Rochard – available for an intimate Q&A to address any and all questions.

That’s right, the event, held April 30, will be a rare opportunity to speak directly with both Dan and Pierre about the intricacies of Bitcoin and how they see the technology’s past and future.

The session will be moderated by Kraken Editor-at-Large Pete Rizzo.

What Will the Webinar Cover?

Yes! Questions will be handled live by Pete in accordance with our User Content Guidelines.

Alternatively, if you have any topics or questions that you would like answered during the session, you may send them via email to [email protected].

What Can I Do to Prepare?

An experienced founder, Dan Held has completed two successful exits for past ventures Interchange (acquired by Kraken) and ZeroBlock. You can find him on Twitter: @danheld.

Pierre Rochard is an economist at the forefront of exploring Bitcoin’s monetary policy. You can find him on Twitter @pierre_rochard.