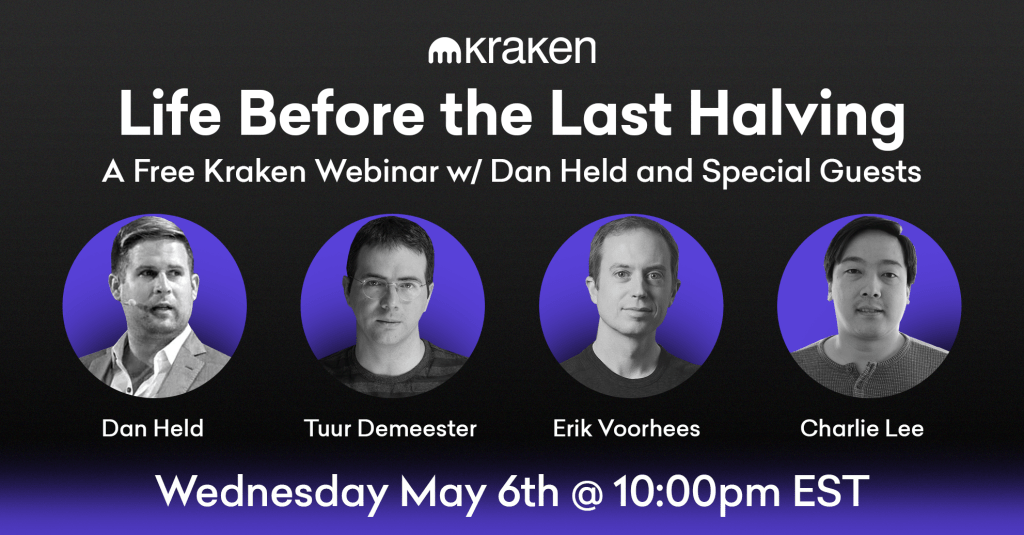 Ever wondered what it was like to discover Bitcoin in its earliest days?

From its mysterious founder to the many tales of riches won and lost, there’s no shortage of lore about Bitcoin’s ascent from upstart payment network to a secure, global store of value.

But, believe us, the early days weren’t all they’re cracked up to be.

To celebrate Bitcoin’s third halving, we’re seeking to give our clients a firsthand glimpse of those formative years. This special digital event, to be held this Wednesday, will reunite prominent figures who helped grow and mature a technology now at the forefront of financial freedom.

Moderated by Director of Business Development, Dan Held, this special session will include guests and industry luminaries, including:

What Will the Webinar Cover?

Yes! Questions will be handled live by Dan in accordance with our User Content Guidelines.

Alternatively, if you have any topics or questions that you would like answered during the session, you may send them via email to [email protected].

What Can I Do to Prepare?

We also highly recommend you consider attending Kraken’s upcoming VR Halving Party, which will be held Sunday, May 10th on AltSpaceVR and be streamed to YouTube and Facebook.

An experienced founder, Dan Held has completed two successful exits for past ventures Interchange (acquired by Kraken) and ZeroBlock. You can find him on Twitter: @danheld.

Charlie Lee is the creator of Litecoin and the Managing Director of the Litecoin Foundation. Charlie is a former Software Engineer at Google and Director of Engineering at Coinbase.

Erik Voorhees is among the top-recognized serial Bitcoin advocates and entrepreneurs. He founded ShapeShift in 2014 as an elegant, secure, and fast solution to digital asset exchanges.

Tuur Demeester is an independent investor and newsletter writer with a background in Austrian economics. He discovered Bitcoin on a research trip in Argentina, and began recommending it as an investment at $5 in January 2012.