Earlier today, Kraken announced that we have acquired Interchange – a leading portfolio reconciliation tool for institutional traders. As part of the acquisition, we’re excited to bring over the Interchange team, including co-founders and crypto veterans Dan Held and Clark Moody. Below Dan and Clark get into why this acquisition made so much sense to them, what the future might look like for crypto hedge funds and the plan ahead…

Dan: Being at a small startup you are very resource constrained – each day you’re putting out a mission critical fire that could destroy the company in its fragile infancy. With Kraken’s focus on investing for long-term growth, we will be able to leverage the resources, customers and team to build what we could only dream of building before. My role specifically will be on Business Development across all products, so I’m personally excited to dig into everything Kraken has to offer.

Clark: The culture at Kraken is most exciting to me. Top priority is placed on security, both digital and physical, for all employees. This emphasis on security means that everyone pays attention to the details, and the engineering effort is higher quality because of it.

Dan: I’ve been in the crypto space for over seven years now and it’s been a wild journey to watch different ideas come and go – from the first alternative cryptocurrency bubble in 2014, to the most recent one in 2017. At the end of 2017 tokens/SAFTs/ICOs were the dominant narrative. Now it’s almost nonexistent. Crypto hedge funds have had to deepen their understanding of Bitcoin and blockchain fundamentals. Additionally, many learned a hard lesson regarding diversification in an asset class that is highly correlated. The hedge funds that have survived the crypto winter are now more mature, sophisticated and process heavy.

Clark: What’s most impressive about the institutional space is the increasing sophistication of strategies and allocation approaches. Funds are exploring every possible instrument and technique to find an edge in this 24/7 global market. I expect this trend will continue as larger players bring more capital to the market and as exchanges introduce more products, including advanced derivatives. 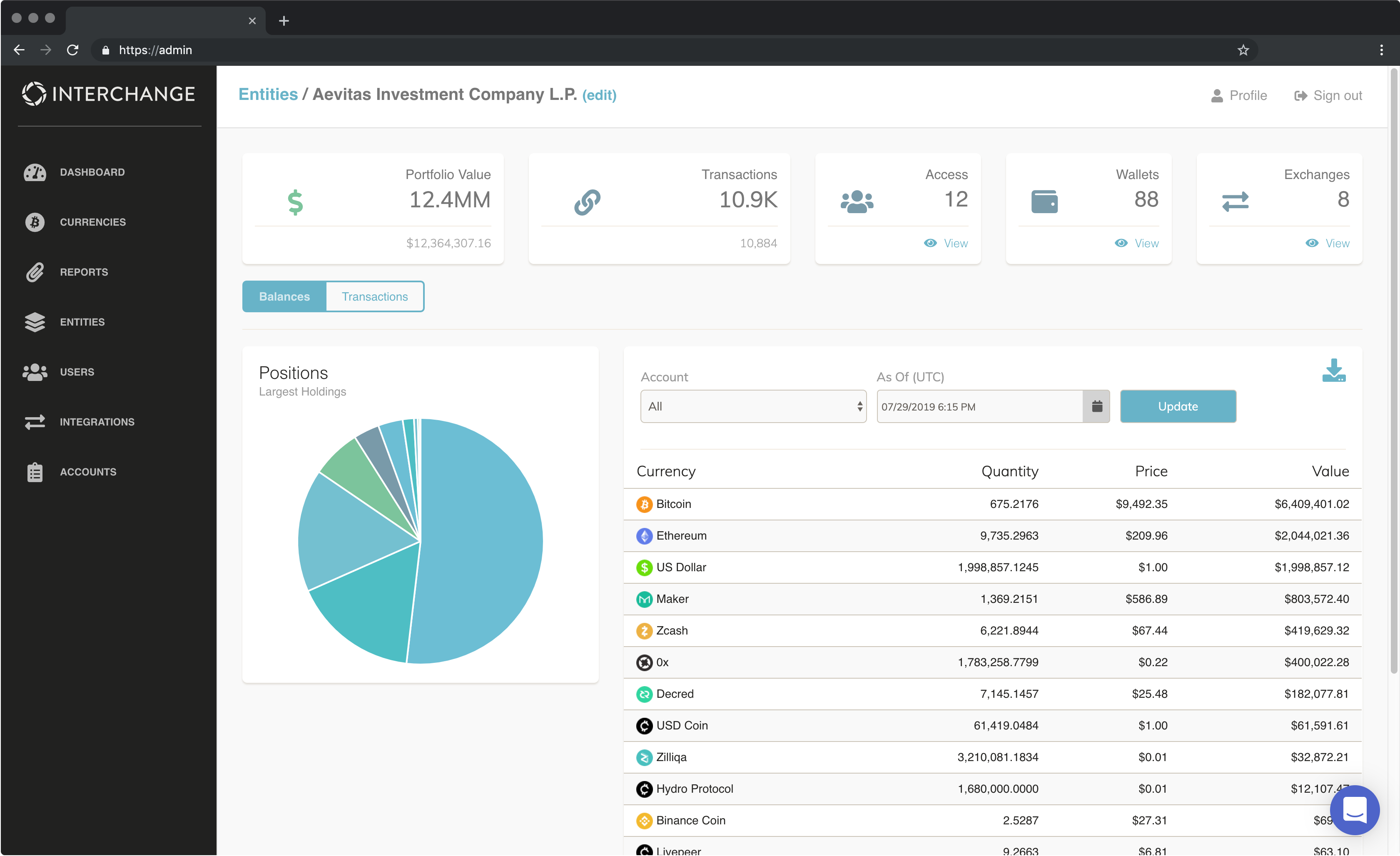 A look at the Interchange dashboard

Dan: I got my first Bitcoin in 2012 when my friend paid me back for a beer with a Casascius coin. At that time it was a good way to bridge the analogy to digital, as digital money was still a very new idea. After learning more about how it enabled humans to store value and interact with complete freedom, I was hooked! I was a big Libertarian and Austrian school of economics guy so Bitcoin was a perfect fit for my ideology.

Clark: After hearing about Bitcoin when it reached dollar parity in 2011, I read the whitepaper and immediately fell down the rabbit hole. Two drivers led to the creation of my first Bitcoin-related product: free streaming market data from Mt. Gox combined with the terrible user experience on exchange websites back then. A few weeks later, I launched a real-time market data website for Mt. Gox with the groundwork laid to build a cross-exchange trading platform. I’ve been building products on the markets side of the industry ever since.

Dan: This is a tough one! I’ve been a fan of Tor, VPNs, torrenting and other more “edgy” privacy enabling services for quite some time. Setting up my Casa node was probably my most “Bitcoin” thing I’ve done. Feels really cool to be able to connect directly to the Bitcoin network without trusting any third party. Don’t trust, verify!

Clark: For a while, I ran JoinMarket as a liquidity maker with the system hooked up to my full node. During my altcoin phase I mined a few blocks of PrimeCoin on my CPU. Checking OpenDime balances via Samourai Wallet is also pretty sweet. You’ll never hear about the really cypherpunk stuff 😉