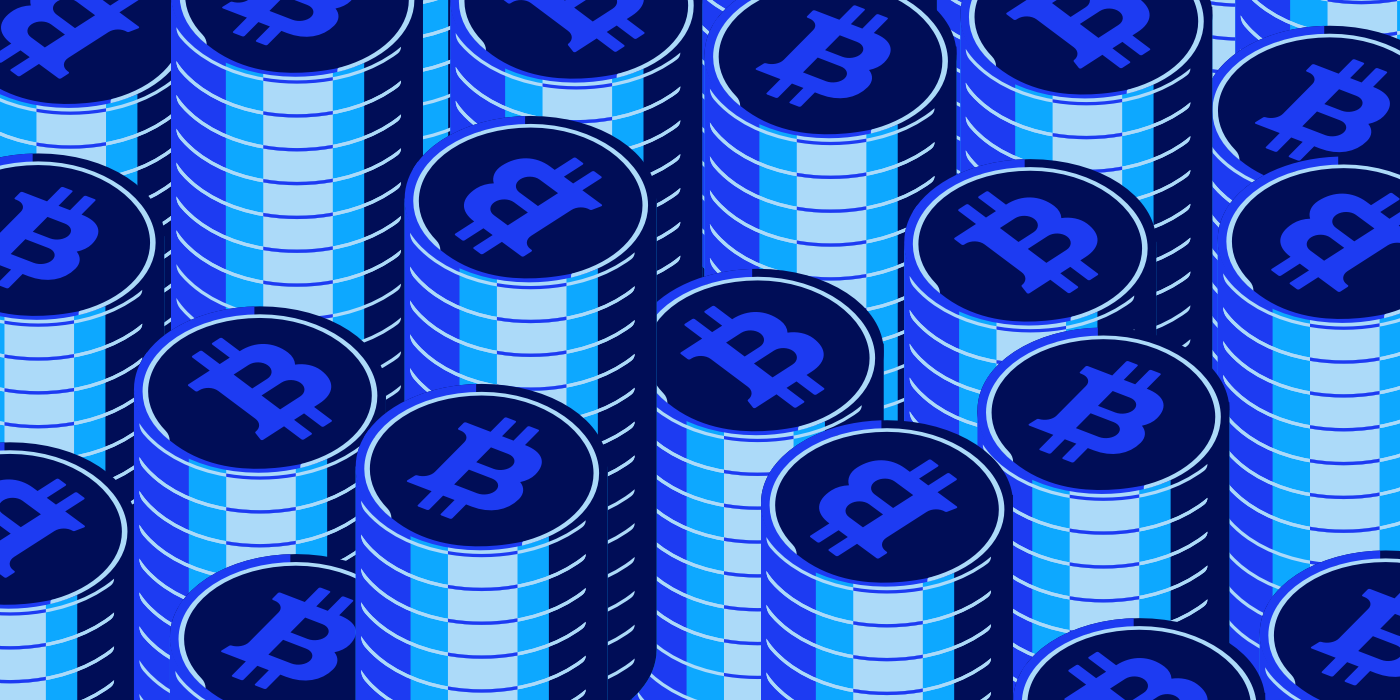 Thursday, April 29, was a big day in the crypto markets, with Bitcoin (XBT) surging over 14% to lead a recovery that all but erased its “Black Thursday” decline just weeks earlier.

Bitcoin’s daily trade volume was up over 300% on the day, but a closer look at the data from our traders reveals a more nuanced story about the climb above $9,000.

Drilling deeper into the trade action for our XBT/USD pair, the rise came in six distinct surges. Five were accompanied by large spikes in volume, though in two of these cases, the volume increases occurred at the end of the surge (Figure 1).

To be sure, to see so many large spikes in XBT/USD volume in just one day is unusual – a more typical day might see one spike, or none at all. 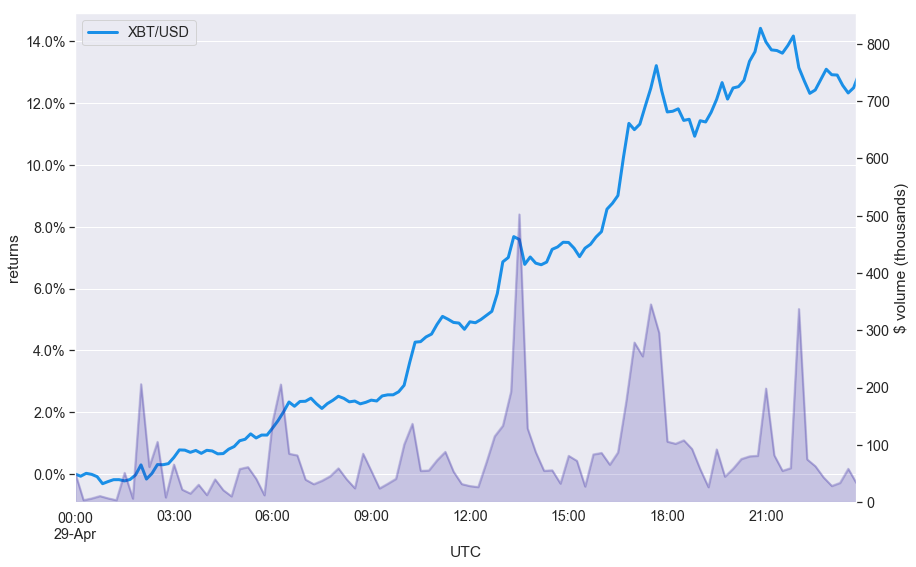 Market orders indicate an urgency to trade, because they prioritize quick execution over price. So, when market buy volume is higher than market sell volume, this indicates greater urgency overall among buyers.

The peaks in buy volume in Figure 2 correspond pretty well with the price peaks in Figure 1, confirming that these surges were indeed due, at least in part, to urgent buying interest. 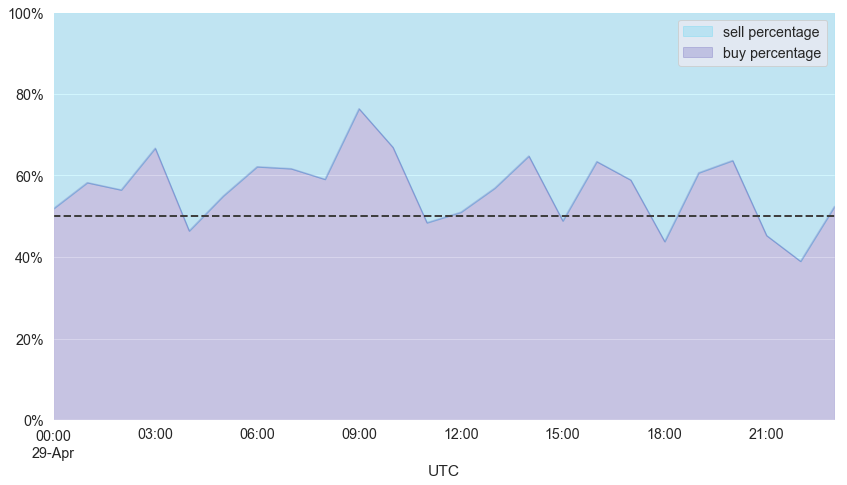 Looking at the order book, which consists of all open limit orders, a notable pattern was that there was a significantly higher volume of sell orders grouped near the lowest asks.

Buy orders, in contrast, tended to be more spread out away from the highest bids.

Figure 3 shows the percentage of sell orders and buy orders that were within 3% of TOB. The percentage of asks often spiked to near 60% or higher, and was above 50% 17x more often than below (above 50% for 1,360 minutes, below for 80 minutes).

Hence, there was a significantly higher volume of sell orders within 3% of TOB compared to buy orders. 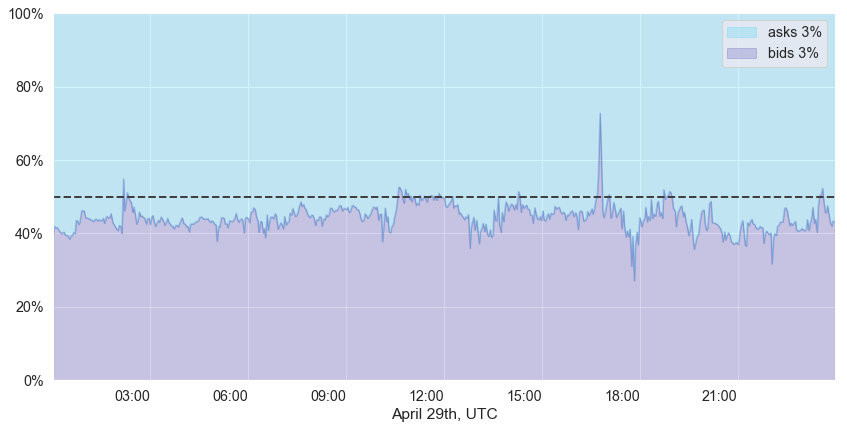 This ratio was below 1 most of the day, meaning that sell orders were on average closer to the TOB than buy orders. The ratio sometimes dipped as low as 0.5, meaning that the average distance from TOB for buy orders was at times about 2x that of sell orders. 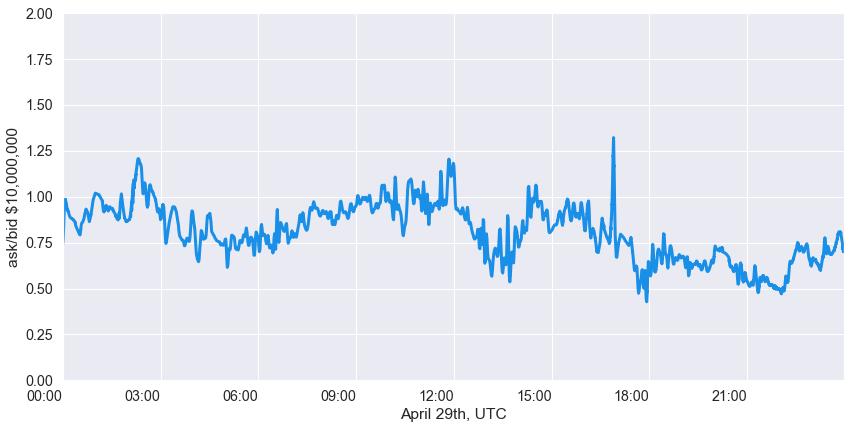 The tighter grouping of sell orders was likely due in part to the strong buy interest, because whenever a smaller volume of asks would appear on the book at a significantly lower price than others, these orders would tend to be seen by buyers as a relative “bargain” and get quickly bought up, helping to keep the sell-side book relatively tight.

However, the tight grouping of sell orders is also no doubt indicative of real competition amongst the sellers to have their orders near the top of the book in order to have a better chance of being taken.

A rising market is not a one-sided story about buying interest. As price goes up, sell interest also increases because sellers are happy to be getting a higher price. But it’s important to keep in mind that the sell-side competition played out more in limit orders, meaning that the sellers were still prioritizing favorable prices over quick execution.

One key to understanding Bitcoin’s April 29 breakout lies in the different characteristics of the buy-side and sell-side interest, and the trading psychology behind market orders and limit orders.

The surges in price were driven by surges in market buy orders, which indicate a tendency among buyers to prioritize quick execution over price, because buyers were more worried that if they didn’t execute quickly they would end up paying a higher price later.

There was plenty of sell-side interest as well, but it came more in the form of limit orders, indicating a willingness among sellers to wait for more favorable prices (prioritizing price over execution speed).

Sellers were overall more confident that they could wait and get their desired price, though there was still competition among the sellers to place orders near the top of the book.