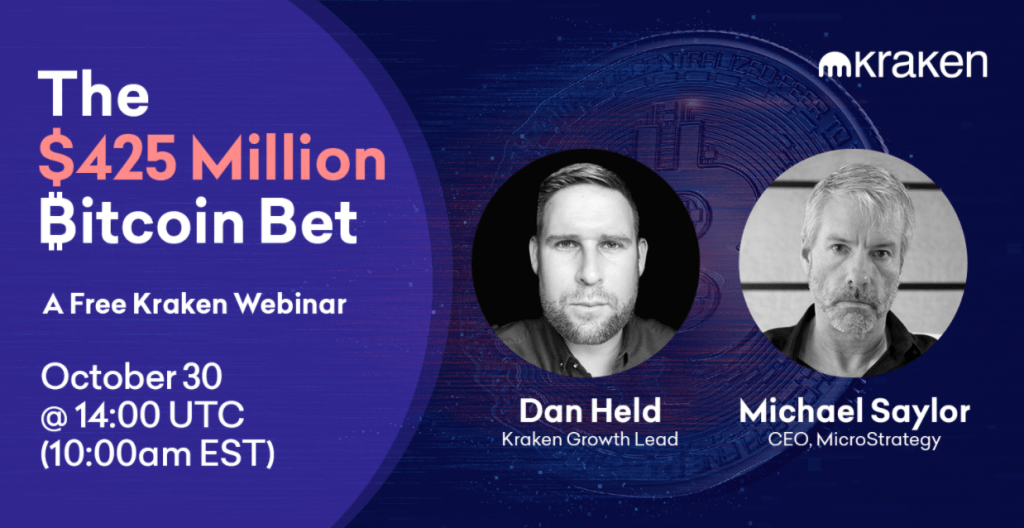 Square, JP Morgan, Bloomberg – there have been major macro tailwinds for Bitcoin of late, but none quite like MicroStrategy CEO Michael Saylor’s $425 million buy with no intention to sell.

To unpack this news and what it means for the market, on Friday, October 30th @ 14:00 UTC (10:00am EST), Saylor himself will join Kraken’s Growth Lead, Dan Held, for a live discussion detailing his conviction in Bitcoin and why he plans to hold his position for the next 100 years.

Widely lauded as a forward thinking entrepreneur and investor, Saylor is the author of The Mobile Wave: How Mobile Intelligence Will Change Everything, and he has invested heavily in Amazon, Google, Facebook and Apple with a firm belief that they would dominate the market and technological landscape.

Saylor and Held will discuss:

Traders and investors who want to understand the long-term view on Bitcoin from one of the sector’s most renowned investors.

Yes! Questions will be handled live by Dan in accordance with our User Content Guidelines.

Alternatively, if you have any topics or questions that you would like answered during the session, you may send your question via email to webinars@kraken.com.

What Should I Do to Prepare?

Still learning the basics of Bitcoin? Take a look at our easy intro guide to the world’s largest cryptocurrency or download our latest deep dive, “Bitcoin & Intrinsic Value”, a free report from our in-house analyst team, Kraken Intelligence.

Mr. Saylor is a technologist, entrepreneur, business executive, philanthropist, and best-selling author. He currently serves as Chairman of the Board of Directors and Chief Executive Office of MicroStrategy, Inc. (MSTR).

Since co-founding the company at the age of 24, Mr. Saylor has built MicroStrategy into a global leader in business intelligence, mobile software, and cloud-based services. In 2012, he authored The Mobile Wave: How Mobile Intelligence Will Change Everything, which earned a spot on The New York Times Best Sellers list. Mr. Saylor attended the Massachusetts Institute of Technology, receiving an S.B. in Aeronautics and Astronautics and an S.B. in Science, Technology, and Society.

Dan Held is the growth lead at Kraken. His former company Interchange – a portfolio reconciliation tool – was acquired by Kraken in 2019.

Prior to joining Kraken, Dan served Uber on their Rider Growth/Global Data team and also built some of the most popular early crypto products including ChangeTip (acquired by AirBnB).